Sporting Clays is the third major type of clay pigeon shooting and the youngest. Sporting clays was developed in the U.K. and brought to America in 1980. Since then, it has exploded across America to become one of the most popular shooting sports in the country.

Sporting clays is shot on a course with 10-15 stations. These stations are laid out like a golf course – Golf with a Shotgun. Some stations feature one, two, or more clay-pigeon launchers, all throwing targets at different heights and angles. There are no official rules regarding how these launchers must be positioned, so no two sporting-clays courses are the same.

Compared to trap and skeet, sporting clays offers the widest variety of hunting-style shots. This makes it a great way to sharpen your skills for the season or to keep them sharp all year.

check out our Events
Events

NSCA 5-STAND Sporting events consist of targets shot in 25 bird increments from five shooting stands with each shooter rotating from station to station. The game offers several different skill lev­els and utilizes six or eight automatic traps to simulate game birds. Targets are released in a predetermined set sequence marked on a menu card in front of each shooting cage. Targets are registered separately under a special set of rules; however, they utilize the NSCA Classification system and all targets are included for total targets shot for the year. NSCA 5-STAND Sporting rules must be followed at all times while conducting this event.

In 1982, Scotsman Raymond Foreman, who had recently immigrated to Canada and was working as a wildlife biologist, was asked to critique the shooting program of the Hunter’s Education Department in Alberta. The Hunter’s Ed instructors were using existing trap and skeet fields to teach students how to shoot waterfowl. Foreman immediately inquired, “Why are you using trap and skeet to teach kids how to kill a duck? Why don’t you use sporting clays?”   Read More

FITASC is an acronym standing for the French words: Fédération Internationale de Tir aux Armes Sportives de Chasse. It is a type of shotgun sport shooting similar to sporting clays, trap and skeet. It involves strategically placed clay target throwers (called traps) set to simulate live game birds/animals- teal, rabbits, pheasant etc. Shooters on each layout or “parcour”, shoot in turn at various combinations of single and double clay birds. Each station or “peg” on a parcour will have a menu card that lets the shooter know the sequence of clay birds he or she will be shooting at (i.e. which trap the clay bird will be coming from). The shooters will be presented with 4 or 5 two-shot singles which they will rotate through and then two pair. In Old Style FITASC there are three pegs on each parcour, with 25 shots to a parcour.

Typical targets are a rabbit, chandelle, overhead, trap (outgoing), crossing, teal (launched straight up into the air), and an incoming bird. The targets are shot as singles and as doubles (Double targets can be simultaneous, on report or trailing/following-“rafael” in FITASC terminology). All single targets may be attempted with two shots and are counted as killed with either shot, two shots may also be used to attempt doubles and either target or both may be shot with only those two shots. In other words, a shooter may attempt the first target in a double and upon missing, may continue to shoot that same target for score if broken even though the second target will be lost due to being missed in the double.

The World FITASC Sporting Championship is one of the premier international sporting events where the USA Sporting Clays Team represents the NSCA and the USA.

American Trap is the original type of clay pigeon shooting. It began in the 18th century and for decades used live birds. Artificial targets—glass balls and then clay discs—were introduced in the late 1800s. By the first World War, trap shooting had evolved into the two main ways it’s practiced today.

Skeet differs from all other shooting sports, because it was originally developed to improve hunting in the field, and only later, because of its growing popularity, developed into a competitive sport.

Its development was actually brought about because of the industrial revolution sweeping the country during the early 1900′s. Rural areas began growing at incredible speed, into large, sprawling, industrial cities.

Hunters were now finding it necessary to travel longer distances in order to find areas in which to hunt. When they finally arrived, they discovered the game was no longer as plentiful as it once was. Not only were hunters having a harder time finding game, but certain species had already been hunted into extinction. One example is the carrier pigeon.

Some hunters turned to trap shooting to fine tune their hunting abilities. However, this was no help because of the lack of incoming and crossing shots.

In 1920, this problem was finally addressed by Charles Davis of Andover Mass. He was the owner of a dog kennel and an avid hunter. He spent many hours trying to devise a way to improve his field shooting. After trying and discarding many different types of plans he finally settled on an idea based on a field, laid out in a 50 yard circle. He called it “Shooting Around the Clock.”

Around the circle, he placed 12 shooting stations, with a single trap, located at station 12. Shooters would fire two shots from each station, and one from the center, equaling a box of shells, or 25 shots. This layout provided almost every type of shot a hunter would encounter in the field.

All went well, until the owner of the adjoining property complained of falling shot on his land. To avoid any future problems, Davis cut his shooting circle in half, and put a second trap at the opposite end of his shooting field. This became the birth of the modern day skeet field.

This hunting practice field became so popular; it soon developed into a popular shooting game. Eventually, it was renamed Skeet, which is the Scandinavian word for Shoot. In 1926, the first National Skeet Championships were held, and shortly after, the National Skeet Shooting Association was formed.

With her bronze in women’s skeet shooting at the 2016 Rio Olympic games, Kim Rhodes became the first American to medal in 6 successive Olympic games. 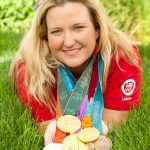